A sex assault reported near Avalon Shores in Bluffton recently was found to be false, according to a Beaufort County Sheriff’s Office report.

Based on her changing suspect descriptions and other inconsistencies, investigators challenged her on whether the assault even occurred.

Ultimately, the girl admitted to investigators that she had not been sexually assaulted and made the story up because she was afraid of getting in trouble for walking off from a party she attended with her parents at Avalon Shores to be with some of her friends, something her parents had warned her not to do.

She is expected to be charged with filing a false police report.

Man turns himself in after fatal crash

Leonard Brown Jr., 27, turned himself into police after being wanted in a deadly crash on Bluffton Parkway.

At 2:45 a.m. on Aug. 27, police responded to a one-vehicle accident along the Bluffton Parkway. There, they found a person dead inside the vehicle. Brown was outside the vehicle and transported to the hospital.

After doctors evaluated Brown, he checked himself out of the hospital and fled the area. Bluffton police, through the investigation, developed probable cause to charge him with felony DUI resulting in a death and driving with a suspended license.

Three unidentified African-American men armed with handguns forced in the front door of a home on Lexus Lane in Burton at approximately 3:30 a.m. Sept. 2.

The subjects held the family in the home at gunpoint and stole several items from the house, including two handguns, electronic devices and cash.

The men then took the keys to the silver 2009 Mazda 6 the victims had parked outside their residence and stole the vehicle.

No one was injured in the incident.

Anyone with information is urged to contact Cpl. Todd Duncan at 843-255-3418 or CrimeStoppers 1-888-CrimeSC if they want to remain anonymous and for possible reward.

A woman was accidentally shot by her boyfriend in her Hilton Head Plantation home on Sept. 2.

The woman was transported for treatment of a gunshot wound to the hand by emergency medical services.

The man told deputies that while taking the handgun apart it accidentally fired and hit his girlfriend.

The woman was interviewed at Savannah Memorial Hospital and confirmed it was in fact an accident. She is currently recovering from the gunshot wound. Although it is still active, criminal charges are not anticipated in the investigation. 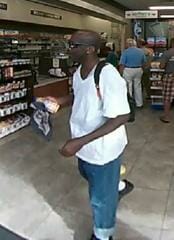 Police are looking for a man they say stole about $25 in merchandise from the Enmark on 1010 Fording Island Road in Bluffton on Aug. 31.

The suspect is between 5 feet, 8 inches tall and 6 feet tall, has a slender build and a long gray goatee.

He was wearing rolled blue jeans, a white T-shirt and had a dark camouflage backpack. 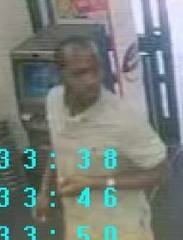 A man is wanted by the Beaufort County Sheriff’s Office for financial fraud.

On Aug. 31, the man made an unauthorized purchase at Walgreen’s at 20 Hatton Place on Hilton Head Island in the amount of $429.

A second purchase for $211 was attempted but the suspect was unable to complete the transaction.

The victim was notified by the bank about the theft.

The suspect is described as a black male, approximately 5 feet, 10 inches tall, 200 pounds and wearing a gray polo shirt and tan khaki shorts.

Man is wanted on forgery charges

The Beaufort County Sheriff’s Office is searching for Larry Ladel Taylor, who is wanted
for forgery.

According to a sheriff’s office report, Taylor attempted to cash forged checks at South State Bank on Palmetto Bay Road on Hilton Head and at BB&T on Burnt Church Road in Bluffton.

If you have any information about this individual, contact Cpl. Calore at 843-255-3307 or Beaufort County Dispatch at 843-524-2777, or CrimeStoppers 1-888-CrimeSC to remain anonymous and for possible reward.

Wells, who has been with the fire district for 13 years, oversees the Burton Fire District’s Emergency Medical Response program, where he trains and maintains certifications for the department’s 44 emergency medical technicians and six paramedics.

Burton is one of only three Beaufort County fire departments that provides advanced life support medical services. It has responded to approximately 1,200 medical emergencies so far in 2016.

The CFO/CEMSO are awarded after a peer review by a panel of professionals from academia, federal and local governments, and leaders within the fire and EMS professions.