Beaufort Eagles’ Omar Cummings, left, face-masks Hilton Head’s Tyler Hamilton during the first half of their Region 8 4A game at Eagle Stadium on Oct. 28. Photo by Bob Sofaly.

With the win, Beaufort High improved to 6-2. Hilton Head slipped to 5-3 with the loss.

As a team, Beaufort High rushed for 331 yards in the winning effort.

Leading the Eagles on the ground, Omar Cummings rushed for a team-high 156 yards and one touchdown.

Clifford is now 100-55 overall as a head coach at Beaufort High.

In another game scheduled for Friday, Nov. 4, Hilton Head is slated to entertain Cane Bay.

Whale Branch pulled away to beat Burke 46-6 in a late-season high school football game on Oct. 28.

Leading the Warriors to the victory, talented running back Irvan Mulligan rushed for a season-high 198 yards and three touchdowns.

Burke hung around early during the high school football game. Whale Branch, however, finished strong, ending the game on a 39-0 run.

Determined Whale Branch scored first and never trailed. The Warriors pulled away to win convincingly after clinging to a 7-6 lead early.

Mulligan has thrived throughout the 2016 South Carolina high school football season. Through eight games, Mulligan has rushed for 891 yards and 14 touchdowns.

Earlier in the season, during a game in mid-September, Mulligan rushed for 192 yards against counterpart Battery Creek.

In addition to the victory over Burke, Whale Branch has notched wins in games against May River, Battery Creek and Garrett Academy.

The Warriors are under the direction of head coach Jerry Hatcher. He has guided the Warriors back to the .500 mark during the current campaign.

With the win, Hilton Head Prep improved to 3-5 and kept its playoff hopes alive. Hilton Head Christian Academy dropped to 1-7 with the loss.

The determined Dolphins battled back from an 11-point deficit to claim the victory. Hilton Head Prep took its only lead in the game’s final minute.

Delivering another touchdown, Ben Viljac scored on a 7-yard run for the Eagles early in the first quarter.

Hilton Head Prep won for the second time in three games. The Dolphins returned to the win column after suffering a loss to visiting Northwood Academy one week earlier.

Bluffton finishes runner-up in Class 3A

Sophia Burnett tied for seventh overall to lead the Bluffton girls’ golf program to the runner-up finish. Burnett shot a 73 and then an 81 for the Bobcats.

Bluffton ended the event second with a 687. Powdersville placed third with a 700.

First-year May River finished fourth with a 727. Pacing May River, Kathryn Thorne shot rounds of 80 and 76 to earn a spot inside the tournament’s Top 10.

Helping Bluffton to its runner-up finish in the state tournament, Camilla Burnett shot 76 and 85 to finish 13th individually.

Lexi Adams rounded out Bluffton’s foursome with a 99 and a 103.

Junior Keenan Huskey was tied at the top of the leaderboard in the final group with James Madison’s Ryan Cole after 18 holes Sunday at 5-under. Huskey and Cole went to a one-hole playoff to determine the individual champion. Huskey’s 20-foot birdie attempt from below the hole on 17 fell just short. Cole was able to make birdie and take home medalist honors after sticking his approach shot within 5 feet of the cup. Huskey recored his first top-five finish of the year after earning runner-up medalist honors.

Sophomore Scott Stevens tallied the low-score of the day for Carolina after shooting a 71 (+1). The Chattanooga, Tenn., native shot 215 (+5) for the tournament and finished tied for sixth individually. It was Stevens’ second-straight top-10 finish for the Gamecocks.

Junior Ben Dietrich, a Bluffton native, shot 75 (+5) Sunday to finish the tournament at 10-over (220). Dietrich recorded his first top-20 finish of the season after tying for 17th individually.

Sophomore Ryan Stachler also tied for 17th individually at 10-over after shooting a final day 75 (+5). Like Dietrich, it was Stachler’s first top-20 finish of the season.

Junior Alex Handy, who made his season debut this weekend for the Gamecocks, tied for 48th individually after tallying a 76 (+6) Sunday. Handy shot 19-over (229) for the tournament.

Sophomore Will Miles, playing individually, tied for sixth with Stevens at 5-over after shooting a final round 74 (+4). The top-10 finish was Miles first of the season. Miles hails from Hilton Head Island.

True freshman Caleb Proveaux tied for 34th in his first career tournament as a Gamecock after recording a final score of 225 (+15). Proveaux, who also played individually this weekend, shot a new career best 73 (+3) in the final round Sunday.

Bluffton is home to another state championship team and runner. The Bluffton boys’ team won the Class 3A Lower State cross country title at the Sandhills course on Oct. 29.

Eighth-grader John Sutay was the top finisher for the Bluffton boys’ team, placing fourth in 17:56.96 seconds.

Cross country programs and individual runners from throughout the state vied for championships over the weekend.

On the girls’ side, six Hilton Head Island runners placed in the top 10.

Leading the Hilton Head Island girls’ team to the victory and Winning herself a state title, Sarah Cooke finished the course in 19:22.52. 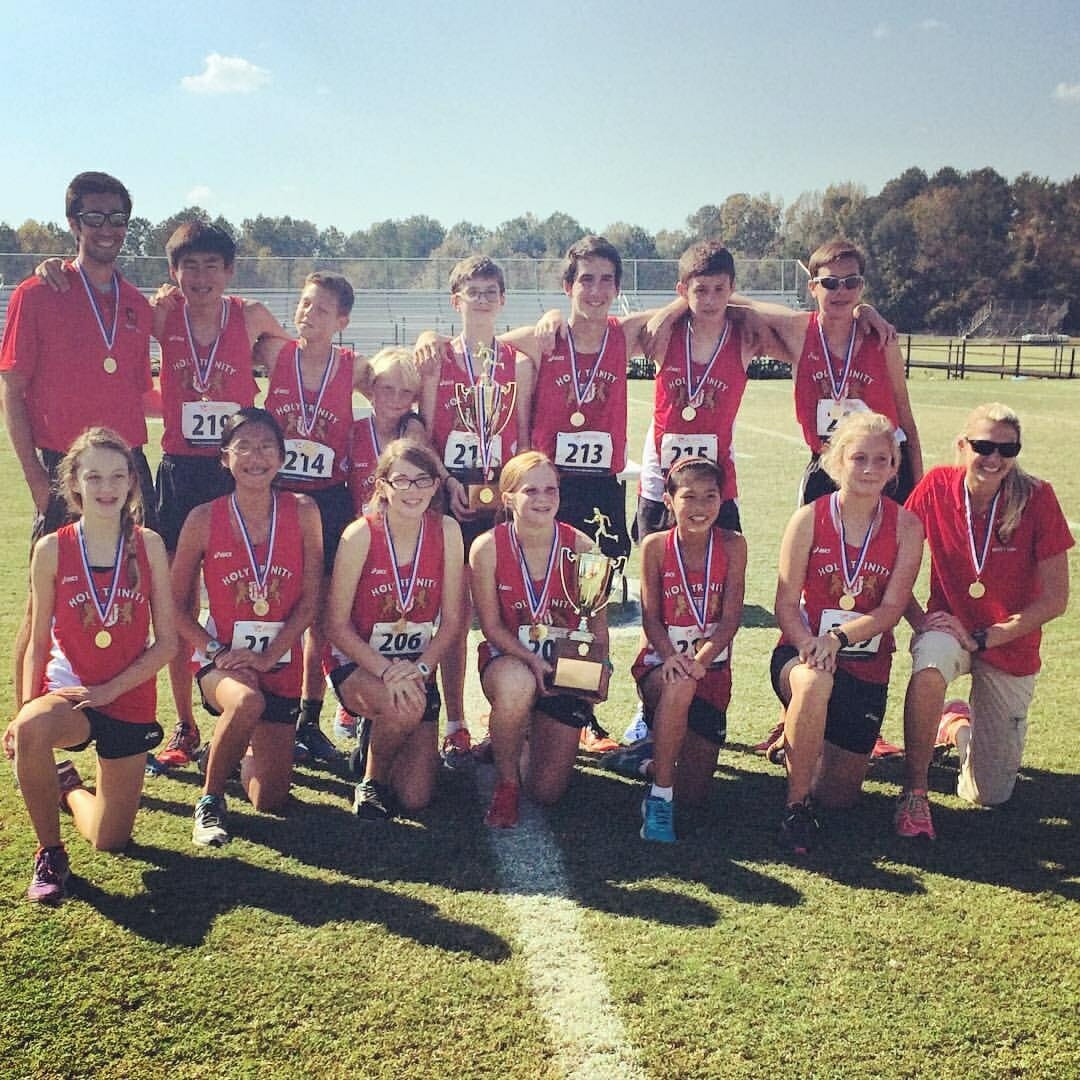 The Hilton Head native recorded an overall record of 18-11 during the 2015-16 regular season. Harris finished 9-2 overall in tournaments in the same campaign.

Harris is majoring in political science.

Prior to coming to Clemson, Harris was ranked at number 50 by TennisRecruiting.net.

The USCB women’s soccer team assured itself of the best overall and conference records in the program’s history with a thrilling victory, scoring the equalizer in the final 2 minutes of regulation and winning 2-1 in double overtime at Webber International.

Taylor Superior netted the equalizer off a Cameron Croney-Clark corner kick in the 89th minute, and Hayley Pina struck the game-winner in the second extra period to lift the Sand Sharks in their regular-season finale.

USCB (9-7-2, 5-3-2 Sun Conference) already has clinched a spot in the seven-team Sun Conference Tournament and is now assured of finishing either fourth or fifth in the league standings. The Sand Sharks currently sit fourth with 17 points – one ahead of SCAD Savannah, which had games remaining against Johnson & Wales on Saturday and Thomas on Tuesday.

The Sand Sharks got off to a sluggish start and were outshot 8-5 in the first half before taking control of the match after the break. USCB dominated possession and outshot the Warriors by a substantial margin in the second half, but it was Webber International who found the net first.

Francesca Mascall scored in the 84th minute, but the Warriors’ lead was short-lived. With less than 2 minutes left in regulation, Croney-Clark sent a corner kick into the box and Superior was able to beat the keeper and force overtime.

After a scoreless 10-minute period, the Sand Sharks dominated the second extra period, outshooting the Warriors 7-0. Pina delivered the game-winner with less than 3 minutes remaining with a powerful strike from just outside the 18-yard line that found the upper-right corner.

The Beaufort Sportfishing and Diving Club’s November meeting will be held on Thursday, Nov. 10, at the Beaufort Yacht and Sailing Club located on Lady’s Island off of Meridian Road. The social begins at 6:30 p.m. and the meeting will begin at 7 p.m.

Beaufort Academy is runner up at regatta

Beaufort Academy hosted the SCISA State Sailing Regatta on Oct. 22 at the Beaufort Yacht and Sailing Club. BA was runner up and received a trophy and presentation from the SCISA rep. Porter Gaud won the SCISA Regatta as well as overall for the entire event, which included 14 schools from South Carolina, Georgia and North Carolina.

Southern Graces Bistro is all about Southern charm

Changing of the guard at Beaufort Academy

LowcoSports.com The stars of the night shined on Senior Night at Beaufort High on Friday, as