Photo above: Solicitor Duffie Stone, along with members of the community, gathered at Coligny Beach Park on Oct. 29 to Take a Stand in the Sand against violence toward women. Stone spoke to the crowd following a 1-mile walk on the beach and before a candlelight vigil and awareness event, sponsored and organized by the Zonta Club of Hilton Head Island. Hope Haven of the Lowcountry, the area’s rape crisis and child advocacy center, Citizens Opposed to Domestic Abuse and the Lowcountry Coalition Againt Human Trafficking were also in attendance. 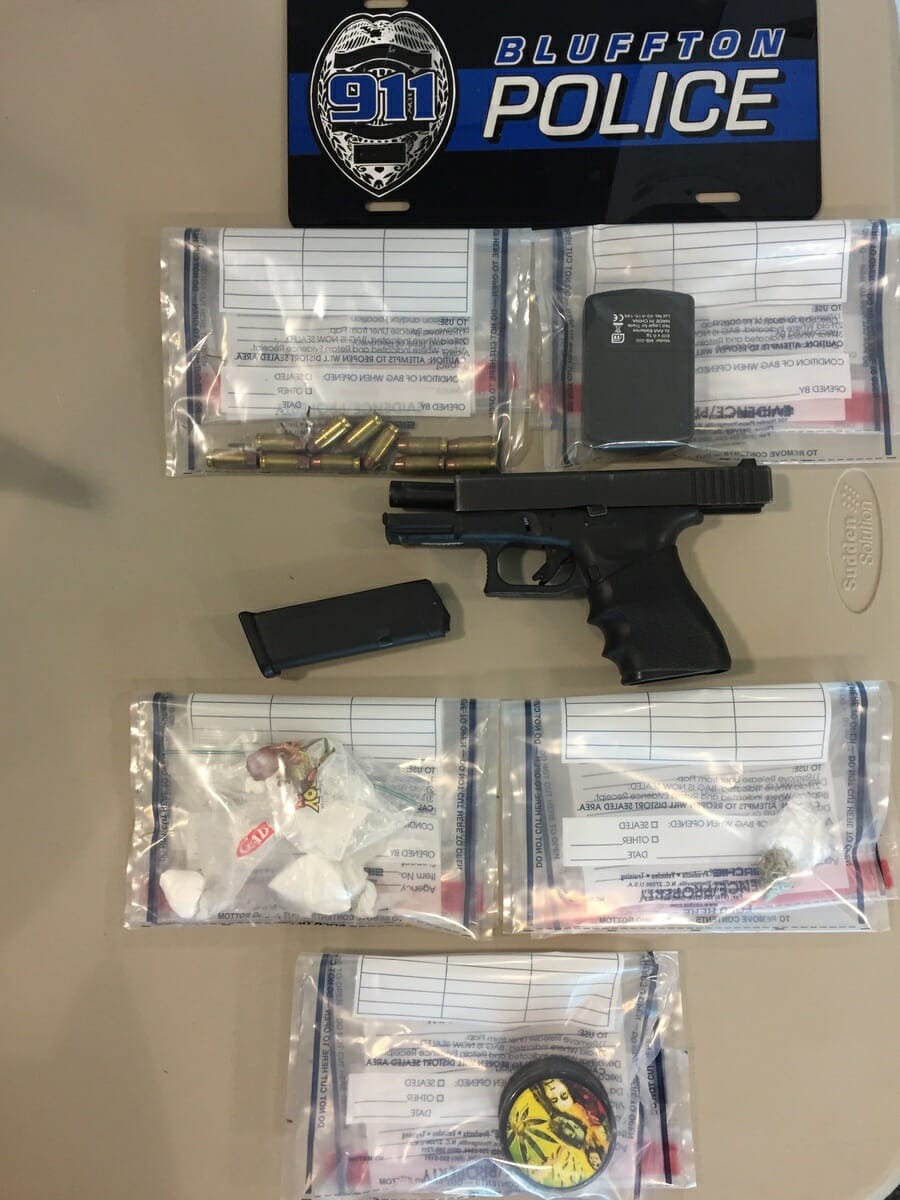 A traffic stop on Nov. 3 at U.S. 278 at Buck Island Road led to police finding drugs and a gun, according to a Bluffton police report.

During the traffic stop, the officer said he smelled the odor of marijuana. When the officer asked for the license and registration of the driver, it was found she was driving under a suspended license and was cited.

When the passenger was asked for his name, he gave a false identity. Eventually, he gave his true name as Tyrell Smith, who was wanted for burglary. Police say Smith was also in possession of a stolen firearm, marijuana and cocaine.

Once Smith was placed in handcuffs, he began yelling profanities at the officer and threatened to kill him.

Smith is being held at the Beaufort County Detention Center.

A man who was arrested in January on charges of sexual assaults on two minors has now been charged with seven more felonies.

Joseph Hunter, 71, of Bluffton, was arrested on Jan. 5 for the alleged sexual assaults of two children occurring between 2006 and 2010.

Hunter, who had been out on bond since January, turned himself into investigators on Nov. 3.

He is being held without bond at the Beaufort County Detention Center.

A 35-year-old man was shot outside of a bar on Hilton Head Island, and the Beaufort County Sheriff’s Office is on the lookout for the suspect in the shooting.

Waldemar Gilyard, 27, is wanted for attempted murder in connection with the Nov. 3 shooting.

The victim is in stable condition.

There are four arrest warrants on Gilyard for attempted murder, possession of a weapon in the commission of a violent crime, unlawful possession of a pistol and discharging a firearm within town limits.

Gilyard is considered armed and dangerous and may still be in the area.

Anyone with information can call 911 or Staff Sgt. Eric Calendine at 843-255-3427 or CrimeStoppers at 1-888-CrimeSC to remain anonymous and to collect a possible reward.

In an effort to improve services for crime victims, legislation will be proposed to consolidate, co-locate and better coordinate multiple state agencies to the Attorney General’s Office.

The new “Crime Victim Services” will include the State Office of Victim Assistance and the Crime Victim’s Ombudsman, currently at the Department of Administration, and the Division of Victim Assistance Grants, currently at the Department of Public Safety. Approximately 55 employees will be affected with no fiscal impact to the state.

“We are giving crime victim services a home in South Carolina for the first time in our state’s history,” said Haley during an event held at Columbia’s Crime Victims Memorial Gardens that was attended by members of the General Assembly and other stakeholders.

“Combining these agencies and streamlining their services is the right thing to do. Citizens deserve good government, victims deserve justice, and this is one more step forward to improve how we work for the people,” she said.

With a targeted effective date of July 1, 2017, the governor will issue Executive Order 2016-43, which establishes a Crime Victim Services Transition Team to develop a plan for transitioning the administration of agencies and employees.