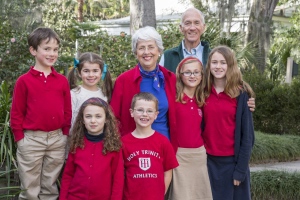 Beaufort Memorial Hospital Foundation has announced that Dr. John and Molly Gray will serve as honorary chairs for the Foundation’s annual Duke Symphony Orchestra concert fundraiser on Saturday, March 28th. The couple has been actively involved in the fundraiser since its inception, and are longtime supporters of both Beaufort Memorial and Duke University.

In fact, Molly’s father was working as Duke’s Business Manager when John (Class of 1968) was an undergraduate there, so even though they were both from Beaufort, Duke University was the tie that brought them together.

“My father would have John over for grilled steaks on Friday nights, and then John would take me out to dinner at the Rathskeller in Chapel Hill on Saturdays,” she said. “That was 50 years, three children, and six grandchildren ago.”

Molly’s love of music goes back even farther. Her grandmother Elizabeth Waterhouse was the organist for St. Helena’s back in the first half of the 20th century. Elizabeth and her sister Rita Crofut spent their afternoons teaching Beaufort’s school children piano and violin lessons in the very house where Molly and John live now.
“Music was always a big part of our family life” recalls Molly.

John confesses to being late to the game in music appreciation and regrets that he wasn’t among those pupils, but now he feels there isn’t a concert to be missed. Chief among them, of course, is the Duke

For 12 years now, Conductor Harry Davidson has traveled with more than 60 Duke undergraduate and graduate students to perform works of well-known and emerging classical composers.

“The first year we presented the concert, the audience gave the orchestra a spontaneous standing ovation after the opening number,” said Alice Moss, Executive Director of the BMH Foundation. “They’ve been a hit every year since.”

The concert is one of the Foundation’s most popular and successful fundraisers, having raised over $224,000 to support BMH’s Healing Arts Program at the Keyserling Cancer Center and in the main hospital.

“The students look forward to the trip each year,” says conductor Davidson. “As our only concert away from Duke, the Beaufort concert is one of the highlights of our schedule.”

While in town, the students stay in the homes of Beaufort residents, an experience that students and residents alike look forward to each year.

“It’s always fun to host some of the students who travel all this way to volunteer for the weekend,” says Molly. “We’ve gotten to know some truly remarkable young men and women, and they seem to really enjoy their time in Beaufort.”

Make plans now:  General admission tickets are $35. Patron tickets start at $75 and include premium seating and an invitation to the conductor’s reception after the concert. To purchase tickets, visit www.bmhsc.org or call 843-522-5774.

The Philanthropy Corner for Feb. 19th-25th